So, just this last year, I entered in the Japan Foundations' Annual International Furoshiki Design Contest. This was the first year that the contest was opened to the States, and after seeing the posters scattered about the illustration department (and a nice tip off from a few teachers), I decided that this was something that I couldn't pass up.

The idea was to create a work that pushes interaction between Japan and the respective designer's country. As an avid lover of folklore from both countries, I decided to incorporate my favorite furry animals as creatures that often find themselves the subjects of these stories. Besides, who can resist these little charming critters? 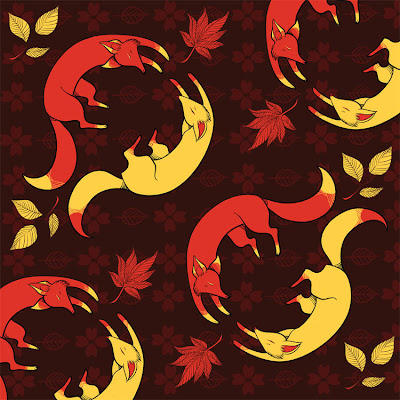 Tomodachi, "Friends", 2010
To my surprise (and I mean that - I didn't know this happened until I was feeling self absorbed and googled my name, only to find it on the Japan Foundation website), this piece was chosen for an honorable mention! Well, just this past week, I received an email saying that they were going to ship me twenty copies of this work, printed on actual furoshiki fabric! I am absolutely delighted!

I will be sure to take a photo of the actual fabric when it comes in the mail - Glad I have something to look forward to in the coming weeks.

'Til then!
Posted by Lillian Joan Duermeier at 1:19 PM 1 comment:

Lillian Joan Duermeier
Hello! My name is Lillian. I am recent graduate from the Milwaukee Institute of Art and Design, with a BFA in Illustration (and a minor in art history!). I am in love with inspiration and observation. I'm also a fan of dollhouse miniatures, baking, travel, patterns, and animal shaped food.